Andreas Kendiora, Lightcurve’s researcher, published a new supporting Lisk Improvement Proposal (LIP) this past week. The supporting LIP bothers around Lisk’s roadmap – “Enhance signature scheme.” Kendziora in the LIP introduces the concept of message tags which prevent some kind of signature repurposing. Specifically, it addresses concerns around signature for more objects next to transactions and blocks. The LIP introduces message tags for signatures, ensuring that message tags are prepended to the binary messages before being signed. It ensures each message type which could be a transaction, block header, etc., gets a unique tag and for each schema.   These particular tags ensure that a signature for one message cannot be valid for another message serialised to the same binary message.

Andreas Kendziora, in proposing this LIP, looks to avoid replay attacks and re-usage a signature for a different message of another kind. Moreover, more supporting LIPs are underway, as Max Kordex explains in a recent YouTube video. As Lisk.js 2021 inches closer, a total of six supporting LIPs will be released and fourteen core LIP for Lisk Interoperability Solution, totalling twenty.

On the 8th of April, Max Kordek, CEO and Co-founder of the Lisk Blockchain, held an AMA session. This session featured Lightcurve’s researchers, Andreas Kendziorra, Research Scientist, and Jan Hackfeld, Head of Research, to discuss the recently released technical documentation of Lisk Interoperability Solution with the community.

Lightcurve’s researchers answered questions bothering around fees for cross-chain updates (CCU) and who bears the cost of these transactions, feedback from industry experts on the recently released high-level overview of Lisk’s Interoperability Solution etc. Corbifex from Moosty also inquired to know how Lisk’s interoperability will be implemented, whether in modules or multiples. Andreas explained that it’s the user who initiates the CCU transaction that pays the fee. As an incentive, such a user sending the CCU receives the fees of the cross-chain messages contained in the CCU. However, the incentive will depend on how large the remaining part of the CCU is, like a situation where there are many validator changes on the sending chain, then the CCU becomes a bit larger.

Andreas responded to a community member asking whether the recent release of the high-level overview of Lisk’s Interoperability Solution from industry experts.  He shared that what was published was only the high-level overview of the solution and not the detailed one; hence, it hasn’t generated any industry expert opinion or peer review just yet. And on the part of implementation in modules or multiples, Jan Hackfeld responded by saying that interoperability has not started yet; hence, the development team hasn’t decided. He, however, hinted that due to the complexity of the interoperability functionality, it’s most likely the team will adopt a modular approach for implementation. Read up on the transcript for complete answers to the other questions.

On the 8th of April, Max Kordex held an AMA session, answering various community members’ questions. He responded to questions about Lisk.js 2021, upcoming plans for Lisk, partnerships, and much more. Regarding a possible listing on Coinbase and other US-based exchanges, Max said Lisk Foundation had reached out to various law firms to acquire a legal opinion required for those US exchange listings.

Regarding Lisk Center Tokyo, Max responded by saying that although Lisk Foundation had not searched for any other alternative after BINARY STAR where Lisk Center Tokyo operated from shutdown operations. However, he mentioned the possibility of creating a Japanese Lisk Association proposed by a community member LISKer.

As to the Lisk Foundation’s solvency, which is the parent body overseeing all of Lisk’s central operation and partnership with Lightcurve blockchain studio, Max Kordex mentioned that the foundation recently liquidated 300 BTC valued at around $17 million. According to Max Kordex,

“We [Lisk Foundation] have cash for around 3 years of operations. With the remaining of our assets as seen in today’s Financial Update, we have a run rate of over 10 years.”

When asked about Lisk’s primary advantage over other chains regarding the recent buzz in NFTs, Max responded by saying that NFTs won’t live and become extremely mainstream on a single blockchain. He argued that, currently, NFTs represent, in most cases, collector items. E.g. a piece of art, and are not often used for other purposes. This is the case due to the very high transaction fees on Ethereum. However, with sidechains, the transaction fees will be low enough to use NFTs for other interesting use-cases as well, e.g. tickets or royalties.

Max also commented on the recent expansion of Lightcurve’s team. In recent days, Lightcurve had employed a Backend Developer, Motion Designer and Community Manager. He also mentioned that they are still actively scouting for a competent Frontend Developer to take up a role with the studio. 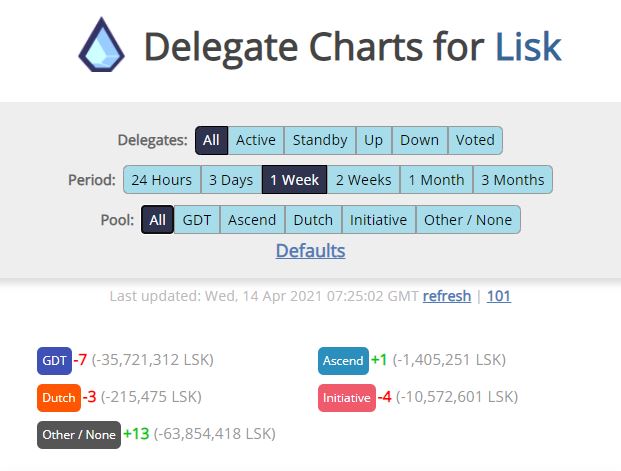 If you have never made a transaction from your LSK wallet, initialise your account!