Here is the second article to discover the Lightcurve team. This time we deal with the area of development, which among others includes: Altay Aydemir, Mariusz Serek and Vít Stanislav.

Before joining the Lightcurve team, Altay worked on a number of applications, among these you can find apps for web platforms, but also iOS, Android, tvOS and smartTV. His main motivation is to be able to create products accessible to everyone and at any time with just a few touches. Altay believes that the blockchain will have an enormous economic and social impact on the current system, rethinking distributed computing from scratch and making it decentralized, more transparent and safer.

Recently he worked on the creation of an iMessage extension for Lisk Mobile using React Native. This extension was included in Lisk Mobile 0.10.0, released in February 2019. Thanks to it users can now request and send LSK tokens directly from the iOS-based messenger without going through the Lisk app.

Mariusz, aka 4miners, is a forging Lisk delegate.
Before joining Lightcurve, Mariusz served as Junior Software Engineer for Home.pl, the largest domain registrar in Poland. He decided to join the Lisk team because he believes he can contribute to create a better future with blockchain technology.
He works now as a Backend Engineer at Lighcurve. According to his Github account, he contributed mainly to Lisk repository, with 700+ contributions in the last year, and sparsely to Rise and ARK in the past.

He developed the 4miners explorer, alternative to the official one and that provides a lot of information about delegates . He recently wrote a blog post explaining the importance of software testing in blockchain, emphasizing the advantages of automation tests. In particular, the article deals with the software test for the Lisk platform, presenting the developers’ experience and best practices. 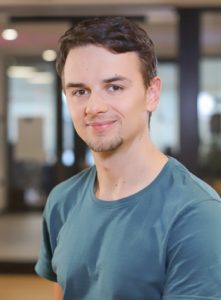 Vít started programming when he was just a teenager. The first language he learned was PHP, then he learned also C, C ++, Python, and JavaScript. He began working on frontend development after developing online learning systems with the Adaptive Learning Research Group at the university. Before joining Lightcurve he was developing web-based tools in JavaScript for Red Hat. Upon learning about Lisk for the first time in 2016, Vít realized he could contribute to the spread of blockchain technology via JavaScript, his favorite programming language.

As a PhD student at Masaryk University, he contributed to write many academic papers (here the list) in the fields of Intelligent tutoring systems, Educational data mining and Computer Science. For example, the article “Elo-based learner modeling for the adaptive practice of facts” examines the applications of learner modeling in a computerized adaptive system for the practice of factual knowledge.